When Kathryn Albertson was asked by the Idaho Statesman in 1989 how it felt to have Boise’s newest park named after her, she lamented, “I didn’t want the Kathryn on there. It’s such a long name.” Her husband Joe Albertson, founder of the national Albertsons grocery store chain, decided to name the 41-acre park for his wife when someone pointed out how both Julia Davis and Ann Morrison Parks nearby were also named after women. “A hell of a good idea,” Joe said. Boise Parks and Recreation Director Doug Holloway says, “I think the tradition of naming Boise’s riverside parks after women really fell into place then. Once you saw it happen with philanthropists in the city, like Kathryn Albertson, it became this trend where land was donated and named after a family’s matriarch.”

When Joe and Kathryn Albertson bought the 41-acre lot below their home in 1978, they deeded it to the city of Boise a year later with the stipulation that the land be used for a peaceful “walking park.” A decade went by, and an unfortunate lack of funding delayed the city’s efforts to develop it. As a gift to the city, Joe finally decided to develop it himself in 1988, paying nearly $1.5 million out of his own pocket to bring their vision to life. The Albertsons’ purpose for creating the park was simple. “We thought it would make a nice addition to the city of Boise. The city has always been so kind to Kay and I in the 40 years we’ve been here,” Joe explained.

The public park system running through the middle of Boise has been dubbed “String of Pearls”, and its nine riverside parks are known collectively as the “Ribbon of Jewels.” The acreage comprising all nine existing parks and future park sites found in the Ribbon of Jewels were deeded to the city by families and named for the families’ esteemed matriarchs. Doug Holloway says, “It’s an honor because it shows the proud ownership each of those families have in the city to be able to do that.” Just as the Boise River unites these parks, the women themselves are linked by their love and appreciation of Boise. Each of these women saw their future in this city, and they worked hard for the majority of their lives to be able to give back to the community they grew to hold so dear. In return, their families chose to honor them with a park- a commemoration as great as the women themselves. 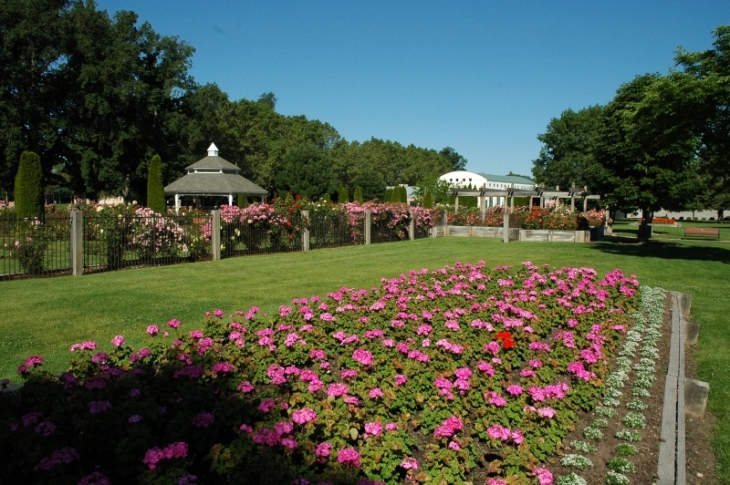 The history of Boise’s park system really begins with Tom and Julia Davis. Tom was one of Boise’s founding citizens, meeting Julia when she visited from Ontario with a friend’s family. They married in 1871. As Boise grew, so did its need for a park, but the expense to taxpayers was a major obstacle in developing it. Citizens tried to convince city council to establish a park by identifying possible locales for development, one of which was a 40-acre parcel of land on the north side of the Boise River owned by the Davises. In 1899, Tom offered the land to the city free of charge, but the gesture was hardly welcomed with open arms. Critics feared it would be too costly for the young city to convert a swampy patch of land prone to flooding into a stately park. His offer was turned down. Julia did not live to see the Boise City Council finally accept Tom’s land offer. She is rumored to have contracted typhoid fever from a sick traveler, and passed away in September of 1907. Shortly after her death, the city purchased the land from Tom for one dollar under the condition that it would “always and forever be used for public purpose” and henceforth be known as Julia Davis Park.

The city’s largest existing park, located on the south bank of the Boise River between Capitol and Americana Boulevards, bears the name of Ann Morrison. She grew up in the mountains of Idaho, moving to Boise with her family at the age of 16. She worked several jobs as a stenographer and secretary before meeting Harry Morrison and marrying him in 1914. With no children of their own, Ann was solely devoted to her husband and his construction business. R. J. Brown, Jr. wrote, “Her life in those early days was not for the fainthearted. A lesser woman would soon have fled the rough camps…she ate in the unscreened mess halls where the table and china were gritty with sand, underdone beans like buckshot were served daily, the bread was soggy, and the coffee was bitter and thick as molasses.” Her on-site duties included, but were hardly limited to, taking dictation, keeping the books for all her husband’s projects in every season, purchasing construction equipment and supplies, tracking inventory, and on occasion, cooking three meals a day for 60 construction workers. She wasn’t even on the payroll.

Following the successful development of Julia Davis, Boise’s flagship park, in the early 1900s, Harry Morrison wanted to create a similar tribute to his wife Ann after she passed away in 1957. R.J. Brown, Jr. said, “He envisioned a living memorial to the woman who shared with him the trials of Morrison-Knudsen’s struggling infancy and the tribulations of its ultimate success.” In only ten months, Harry converted a large stretch of swampy, river-bottom land into a 153-acre tribute to his late wife. When describing the exquisitely landscaped grounds, which include 2,000 trees and shrubs, 30,000 smaller shrubs and perennials, 20,000 flowering annuals, and a magnificent reflecting pool and fountain, local publications said it called to mind the Tuileries Gardens and Taj Mahal. But it was never intended to be a “keep-off-the-grass” park. Strategically placed amidst the impressive landscaping are sports fields, picnic areas, a playground, and a boating and watersports area. The Harry W. Morrison Foundation spent well over a million dollars developing the park before deeding it to the city in June of 1959. The day of the dedication ceremony, 46 flags were flown for every country Ann had visited. Thousands of Boise residents were in attendance, remembering the woman known for her friendliness and generosity. A gilded bronze medallion engraved with Ann Morrison’s likeness was unveiled at the end of the ceremony that read: “She knew the shrines, the people, the cities of far away lands…yet dearest of all was this her home, the place she knew as Boise the Beautiful.”

The city has done such an outstanding job maintaining its parks system that it does the Ribbon of Jewels’ namesakes proud. Boise Parks and Recreation director Doug Holloway says, “We have a vision to make Boise the most livable city, and maintaining our parks system keeps us marching toward that goal. Our mayor and city council look to us in the parks department to maintain quality of life for the city and it’s a responsibility we take very seriously.” As federal funding is generally not available to help cities develop and maintain parks, it is interesting to note that Boise continued to develop and improve the parks system during the economic downturn of 2008. “Our mayor said he did not want to go backwards. We had to cut a lot of things, but we knew it was important to maintain and increase the service level with our parks, even during the downturn.” State of the art playground equipment, finely manicured lawns and horticulture, walking paths, benches, game courts, and a generally spotless appearance are typical of all of Boise’s parks. The parks have become a community asset. They bring people and businesses together, and they attract others to the Boise area, not unlike the women behind the Ribbon of Jewels.

The women of Boise’s Ribbon of Jewels are inarguably a distinguished group. For over a century, women as varied as a pioneer originating from Ontario, Canada to a Democratic senator’s wife, not only embraced Boise as their home but also worked tirelessly to give back to the community that welcomed them so wholeheartedly. It is a unique tradition to name parks after women- one that Doug Holloway sees as the perfect tribute. “These women are reflected in their parks. Marianne Williams Park is where their family’s business operation took place. Julia Davis Park was an apple orchard. Kathryn Albertson Park highlights the open space and wildlife below their home. Our parks take on the characteristics of these matriarchs who were very civic-minded.” A monument such as the Ribbon of Jewels, where the city’s most valuable parks are named after Boise’s female citizens, is a testament to Boise’s values. It honors these women’s lives and hard work on behalf of their city and their families. The citizens of Boise know the park will be there for generations to enjoy, standing as a symbol of the city’s heritage and future.

To see the original article go to: Read More